Warning: This post contains spoilers! If you have not watched our match with Yeti, you should come back later and read this after watching!

By this point we had spent quite a bit of time swapping our engine out and preparing for our fight with Yeti.  We ran into a number of other small problems along the way.  We noticed our throttle servo was not behaving properly, so we had to swap that out.  We didn't have many spare servos, so this was concerning.  Nevertheless, the filming schedule was fairly spread out at this point, so we felt pretty prepared for the fight.  We learned Yeti was removing his forks in favor of a large fixed wedge on the front.  This is always frustrating, because fighting a wedge means we flip ourselves over, but of course I would have do the same if I were fighting Icewave.

This fight was to be filmed as a Main Event, presumably because of Yeti's high ranking and great performance last season.  This means we enter through the tunnel! 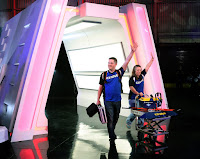 The match gets under way, and we engage in a few big hits.  Neither bot seemed phased though, and we kept going.  Lots of sparks were flying, and it felt like an eternity. According to these pictures, we were approximately 20 seconds into the match at this point.

Then,  all of a sudden, our blade has a direct impact with Yeti's wedge.  This sends Icewave flying as I predicted.  I remember being stunned, hoping Icewave still drives when it lands.  Amazingly, we land on our wheels and we can still drive!  I try to maneuver Icewave to a safe area to spin up again, not even noticing that Yeti isn't moving.  What happened?  The driver of Yeti, Greg Gibson, is trying everything he can, but Yeti seems unresponsive.  The refs start a countdown on Yeti.

The replay of this shown on Discovery was really cool to watch because it shows how much our blade flexes on impacts like this.

At this point, it's probably worth going off-topic to talk about something I'm sure most builders go through.  Icewave, along with most of the other robots on the show, weighs 250 pounds.  It requires at least 2 people to lift onto a cart when it's fully assembled.  Because of this, Icewave spends most of its time at our shop in 3 pieces:  the bottom part (drive train), the blade assembly, and the top part (the engine).  If we're lucky, we'll get the whole thing together a few weeks before the event and drive around with the engine running.  If there is ever a point where the engine is ready to run and the blade is installed on the robot, we NEVER install the belt that connects the engine to the blade. In previous matches, we've seen Icewave flip over, explode catastrophically, and send shrapnel flying in any direction.  It is just too dangerous to run Icewave's blade anywhere outside of an arena.  All of this is worth mentioning because I think it provides insight into how I operate Icewave in the arena.

At this point in the match, our blade is getting up to full speed again and I stop driving to avoid hitting any arena floor seams or uneven areas that might cause us to become unstable.  I have positioned myself to attack Yeti again if he recovers, but he's still being counted out.  By now I realize that I haven't moved in a while, and the referees also need to see movement from Icewave to prove we're still functional.  At the end of a match, it is common practice to drive back to your starting square to signal that you are still operational.  I decide to try to drive between Yeti and the arena wall to make my way back to our square.  In doing so, I was fooled by our own paintjob (apparently) and accidentally nicked Yeti's wheels with the tips of the blade.  I didn't realize this had even happened until I turned to Greg after the match had ended and he said what happened.  A few minutes after wheeling our robots outside, Greg's team had discovered the cause of their shutdown -- a loose connection on their radio receiver.  I've been on the other end of this before, and it totally sucks.

Back at our pit area, we immediately inspect our recently-replaced engine for cracks.  So far, everything seemed like it was holding up.  We had a few small things to fix, like more servo troubles.  We had to drive to a nearby hobby shop to buy more servos, then fabricate new servo mounts because of the different form factor.  We also had a small crack in our engine cover, which is a common occurrence because the engine cover is thin aluminum that I welded myself.  The builders were fortunate enough to have the support of Lincoln Electric with some really nice machines at the event.  Here you can see Rob from Lincoln has repaired the cracked engine cover within a few minutes.  He was also awesome enough to give me my first lesson and test run at TIG welding.  Their new high-tech TIG machines made it pretty easy for a complete newbie like me to pick up.  I just wish I could afford one! 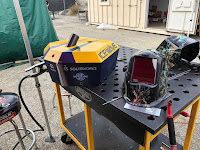 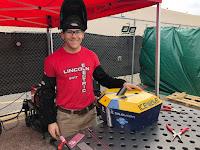