Warning: This post contains spoilers! If you have not watched our match with Vanquish, you should come back later and read this after watching!

The BattleBots 2018 season was filmed over 2 weeks in April of 2018 in Los Angeles.  We arrived early in the morning after driving most of the night and began to set up our pit area.  We were pitted right next to Mohawk, Minotaur, Hypershock, and Blacksmith. 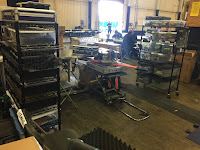 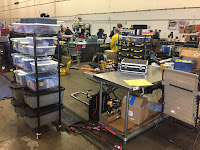 Being familiar with the same robot for 3 seasons paid off and we passed safety quickly. 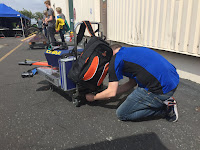 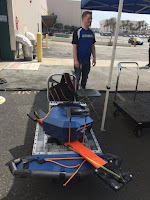 Waiting outside at the Test Box for functional safety inspection. 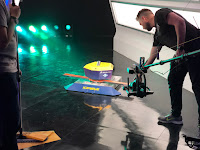 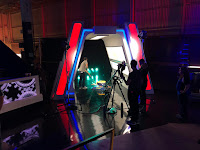 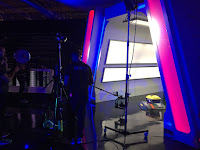 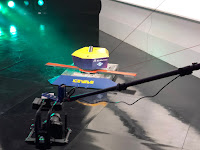 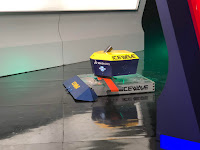 We moved on to taking pictures.  Here you can see how the TV crew gets some of those amazing intro shots in the tunnel. 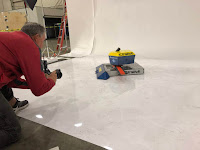 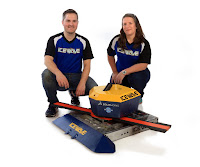 The bot and team photos were taken by longtime BB photographer Dan Longmire.

Going into this match, we weren't sure what to expect.  Vanquish is a relatively new bot built by Jack Tweedy from the UK.  We felt pretty prepared and comfortable with Icewave, but Vanquish does have a thick steel wedge on the front, which historically has been very bad for us. 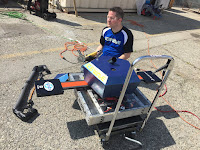 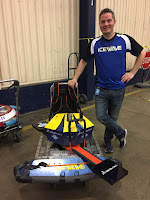 Our only real preparation for this match was to make sure our wedge was adjusted to scrape the floor. 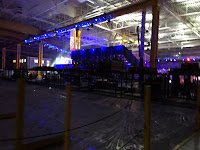 Walking one building over, we make our way to the arena with Icewave.  It is always very surreal getting lined up to fight backstage because the lights, sound, and audience are turned up to eleven.  We make our way into the arena, the referees prepare to start the match, but we learn that Vanquish is having technical difficulties and the match needs to be postponed.  We're instructed to keep Icewave close by the arena, so we park it near the bleachers and just hang out for a while.

Eventually Jack gets Vanquish running, but his weapon is having trouble.  We talked to Jack to ensure him he can have as much time as he needs to get everything working.  Eventually I was told by the backstage crew that our match was on, and Jack was ready to fight.  Our match gets started, and we get a couple decent hits on Vanquish, who seems to be holding up just fine.  Then we run into a snag... 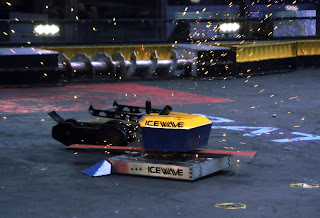 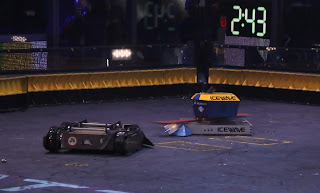 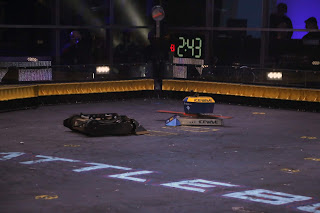 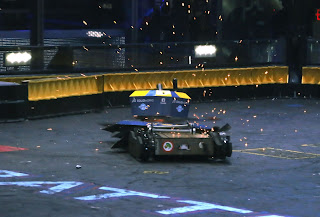 One thing competitors know about, but most TV viewers don't see, is what happens when two robots get stuck together during a match.  You can see in the last photo where we rode up on Vanquish's wedge and we became high centered.  With Icewave on top of Vanquish, Jack was also having trouble moving, so the fight was at a standstill.  The two bots were stuck together, so the match was paused per the rules (Rule 7.4.7 here).  Thanks to clever editing, we didn't get to see this bit of shenanigans on TV, but a lot happened here.  With the match paused, the co-creator of BattleBots, Trey, enters the arena to separate the stuck robots.  Before doing so, he asks me if I can remotely kill Icewave's engine for safety purposes.  Naturally, I agree, knowing we can restart the engine after the doors are locked again.

The bots get separated, the box is locked, and they signal for me to restart Icewave's engine.  I push the button on the radio, but don't hear anything.  Normally it would restart immediately.  I knew something had gone wrong.  They unlock the arena for me to go inspect what is happening.  Immediately, I look under the engine and notice the chain that connects our starter to the engine is completely gone.  We find it lying over near the wall of the arena.  I explain the situation to the Trey, and he says I can’t fix the chain because that would be unfair to Jack (since it was probably knocked off while we fought), and would take too much time, but if I can start the motor another way he’ll allow it. This type of situation isn't exactly planned in the tournament rules and procedures.  They ask how much time I need to fix it, but that would be too long to hold up the film crew. I suggest a last ditch effort: We can try to restart the engine manually with a cordless drill.

I race back to our pit area to pick up the necessary bits and pieces to make this happen.  I've never started Icewave's engine with our DeWalt drill before, but I know it's not easy.  The engine has a lot of compression, even with the relief valve we use, and the drill might struggle.  On my sprint back to the arena, I see Will Bales and ask to borrow his drill as a backup. 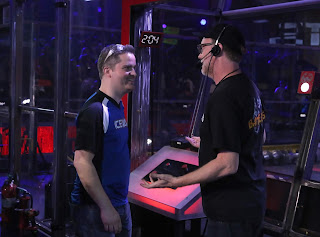 I imagine this conversation with Greg went something like "Come on dude, you're killing us." 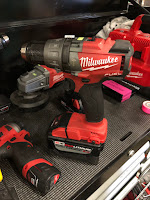 Back at the arena, with the weapon safety lock in place, I try to operate the drill with one hand while operating the throttle with the other hand.  This proves to be difficult, and the drill seems to be too slow.  The engine will pop once or twice, but not stay running.  Trey offers to operate the drill while I operate the throttle to give the engine just enough gas to start.  Eventually the DeWalt drill starts smoking and we're ready to give up.  I suggest using the Hypershock drill as one last move.  Trey grabs the drill, pulls the trigger, and the engine starts immediately!

I am in shock.  The match is back on.  Just a few seconds later, we land the hit on Vanquish that has been replayed 100 times.  Vanquish is split in half.  Jack immediately gives me the signal that he's done, and I know the match is over.  Jack screamed STOP after that first big hit. The show editing made it seem like I might have been angling to go in again for another hit, but I was not.  The only thing I do actually feel bad about is ending the match so quickly after Jack had waited patiently during the whole restart craziness. 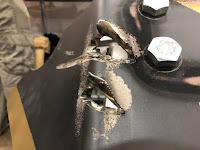 One of these cuts is probably the one that tore Vanquish's wedge completely off, taking half the bot with it.

Our first order of business was to figure out what happened to our starter chain.  Here you can see the bottom of our engine plate when it is separated from the base of Icewave.  The chain is near the bottom of the photo.  It becomes clear that our weapon blade is flexing enough upon hard impacts that it starts hitting things it isn't supposed to, like this chain. 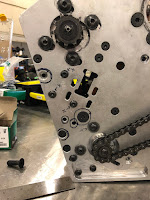 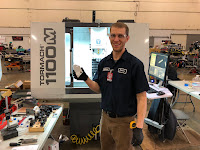 Fortunately we have some time to work on a solution because our next fight is not for another day or two.  We know we can't prevent the blade from flexing, and we can't add more clearance without affecting a lot of other parts.  We decide the best course of action is to design a metal "ramp" part that will prevent the blade from hitting anything important even if it flexes.  Over the next couple of hours, we design the part up in Solidworks at our pit table.  We are fortunate enough to have Jason from Tormach with two great machines in the pits ready to make parts for all builders.  After waiting our turn, Jason cranks out our part with ease and we are ready for our next fight!  Or so we thought...

We continue combing over the robot to find any other issues that we may have not noticed at first.  Then we discover something bad.  Our engine crankcase has a hairline crack near some of its mounting points.

To provide some back story:  Our engine is from a Partner/Husqvarna K1250 saw and was never meant to have an electric starter.  It is a very lightweight engine because it is carried around by construction workers.  The crank case is made from cast Magnesium for strength and weight.  We have spent a stupid amount of time retrofitting this engine with our own custom electric starter system.  When we first built this version of Icewave back in 2015, we used to mount our engine using rubber shock-absorbing mounts.  The starter mechanism was not shock mounted, but designed to accept a certain amount of movement.  This turned out to be too much movement, and after much prototyping and testing, in 2016 we opted to just rigidly mount the engine to the robot through some plastic blocks instead of rubber.  We fought our two matches in 2016 with no problems.

After our Vanquish fight, seeing the hairline crack forming in our engine housing, it became clear that this was our new major problem that needed to be dealt with very quickly.  Fortunately we brought a spare engine.  Unfortunately, there was not enough time before the event to assemble the spare engine with all of its accessories, so we had to begin that process.  Simultaneously we also located and ordered a new engine crankcase from an Ebay vendor in Florida.  Finally, as a last resort, we also began fixing up the cracked engine:  Sand off the paint, drill a hole near the end of the crack to prevent it from spreading further, and epoxy the crank case back together so it can be curing for a while. 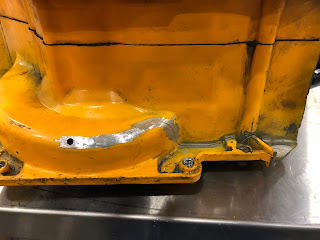 The spare engine is red, which means it was made after Husqvarna acquired Partner. 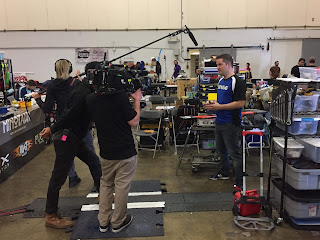 Post-match interview in our pit area

That's all for this post.  In the next post, we get ready for our fight with Yeti!  Continue reading here.
Posted by Marc at 4:46 AM