Warning: This post contains spoilers! If you have not watched our match with Skorpios, you should come back later and read this after watching!

It had now been about 2 days since our Yeti fight, and even though we didn't have much to do, we worked non-stop and used every bit of those two days to repair.  I'm not sure where all the time went.  The producers asked if we would be able to do a cold open with host Kenny Florian out near the safety arena.  The story was that Kenny was trying to talk about Icewave, but couldn't get his lines out because Icewave was so loud.  This was one of the more fun (and scary) parts of non-combat we were able to do.  I was very hesitant to run Icewave with everyone standing so close, but we kept the blade speed relatively slow and it turned out great.  This actually aired as the intro to the episode where we fought Vanquish. 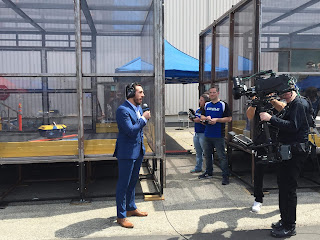 The film crew wanted one more take but we ran out of gas. 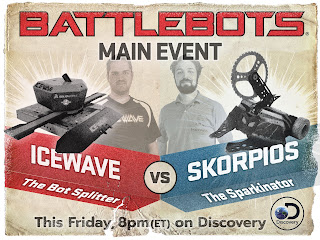 We learned Skorpios had been adding some attachments to their bot, similar to Ghost Raptor's "De-Icer" from Season 1.  We had prepared for this with very simple solution that we call "the beak".  It is a small piece of aluminum that we could attach to the front of the engine cover to deflect the pusher-style attachments like the De-Icer.  We also had a sheet of polycarbonate for overhead defense that we were going to add, but didn't have enough weight for in this configuration 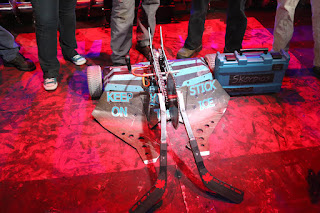 Skorpios's version of the De-Icer was made from hockey sticks! 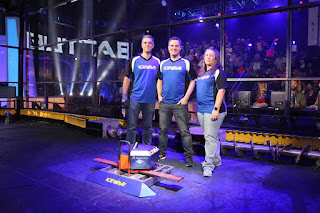 The beak is the orange thing.  Oh hey, it's Alex!

Normally Team Icewave is myself and my teammate Angie.  Angie and I used to work together, and she's a very talented mechanical design engineer.  She is responsible for most of the CAD design of Icewave back in 2015, as well as half of all the fabrication and assembly.  Unfortunately, Angie was only able to stay for the first half of the two-week taping due to work, so I convinced my good friend Alex to fly out and take over half way through.

Alex is a seasoned, old-school BB veteran.  Some of you might remember him from Team Loki back on Comedy Central (Surgeon General, Turbo, Rammstein, and Afterburner).  He's also very experienced with engines, which made him perfectly suited to jump right in.  This match also turned out to be a Main Event, so it was really cool being able to walk through the tunnel as a complete team for this one day before Angie had to leave! 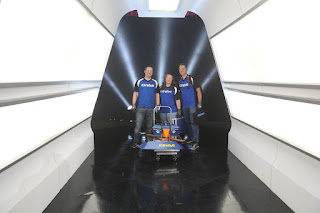 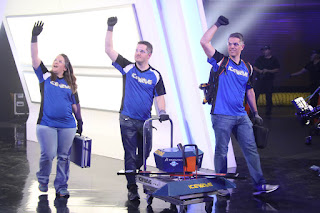 The match gets under way, and as usual, our bots exchange some decent hits.  Very early in the match, we somehow managed to hit a tiny piece of metal on Skorpios that they used to restrain their weapon for safety outside the arena.  The hit bent that metal piece into their weapon, eliminating the ability for their the arm to articulate for the rest of the match.

I knew Orion, the driver of Skorpios, was a great driver.  I now also realized that Skorpios was much faster than Icewave.  At one point we connected and managed to remove part of their front armor.  However, normally after a big hit, we are able to evade for a few seconds while our blade gets back to speed.  In this match, Skorpios was able to recover quickly and stay on top of us, not allowing the blade to spin up. 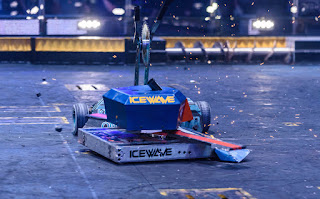 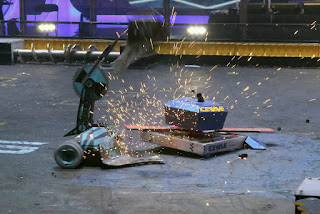 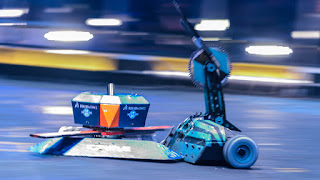 To make matters worse, this uncovered a technical detail we had been overlooking for a while.  Icewave's engine is coupled to the blade through a two-stage belt and chain reduction, but first through a centrifugal clutch on the engine output shaft.  This allows our engine to idle without the blade spinning, and allows the engine RPM to rev up into a more efficient power band during spin-up.  For 3 seasons now, we never really needed to REDUCE the throttle back to idle much during a match.

Here's the problem.  The servo we had connected to the throttle was attached in a way that allowed us to reduce the throttle low enough that the engine would stall.  I had convinced myself this was an added safety feature, in case our remote killswitch failed for some reason.  But in reality, this makes idling the engine very difficult for the person controlling that lever.  Only a few ticks on the throttle would be the difference between "too fast" and "about to stall".

Never having been in this situation before, Angie (who was controlling the throttle) rightly kept the idle pretty high throughout the match to avoid a stall.  Over time, this took its toll on the first stage belt, which became hardened and slick from the heat.  After that, our spin-up time became much worse, so we had no shot of spinning the blade up quickly even if we had broken free.  The match went the full 3 minutes, but Skorpios had pushed us around most of the time.  The judges gave the decision to Skorpios. 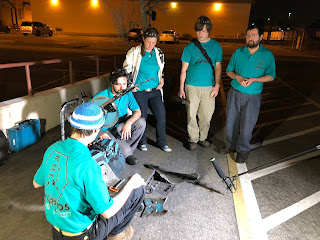 After each match, all bots are required to be taken outside for safety reasons.  We don't want any damaged Lithium batteries exploding in the pits!  Here we joined the Skorpios team as they were being interviewed by a film crew.  It looks like we managed to rip off a few pieces of their wedge at least!  These guys were awesome enough to give us one of the hockey sticks signed by their team too.

You can see by now it's dark outside, so it's late in the day and we still need to get Icewave apart and inspect everything.  With a 2-1 record, a spot in the Top 16 is now questionable, and we need to make sure we're at 100% for our fourth and final pre-season match. 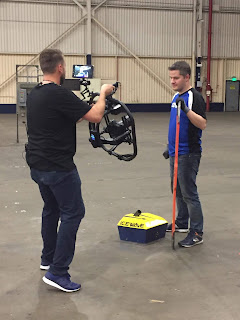 "Nope, scratch that!  We need you to put on a very serious face for some intro shots."

Stay tuned for our next post where we get back to the pit, see what broke, and prepare for our fourth match!