Warning: This post contains spoilers! If you have not watched our match with HUGE, you should come back later and read this after watching!

Back in the Pit

After our frustrating loss to Skorpios, we knew we had to step it up in our next match to prove we were fit for the Tournament of 16.  At this point we don't know who we are fighting yet.  Fortunately, we now had a day off from filming to tear Icewave down and inspect everything.  We were about to find out that we needed it. 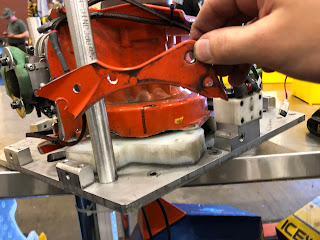 It seems like our new red engine has now succumbed to the shock like the first one, and pieces were breaking off left and right.  We also noticed half of our drive train was feeling pretty seized up.  We brainstormed for a few minutes about potential engine solutions.  The new crankcase we had overnighted from Ebay had not arrived yet due to a FedEx error.  They always seem to have the worst timing.

Having Alex look over the engine allowed us to see the problem with a fresh set of eyes.  Why were we using all of the existing mounting holes on the weak flange of the engine instead of the more reinforced, thicker areas of the housing?  Now it's too late.  The housing has lost so many pieces that it's going to be difficult to salvage.  With the event progressing and more bots getting damaged, the Tormach guys had an overwhelming amount of parts in their queue. 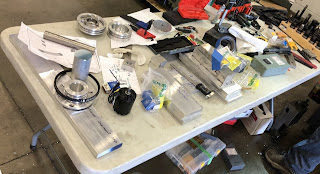 The Tormach guys were awesome, but they needed to learn to say "no" to some of the crazy parts.

We needed a solution much faster.  Without a spare engine, and with limited tools and materials at our disposal, we come up with a plan to 3D print some blocks that will support the engine.  Fortunately, Donald Hutson from the Lockjaw team had arranged with his sponsor, Stratasys, to have one of their fancy new FDM 3D printers at the event for the builders to use!  3D printed parts can be weak in a lot of situations, but in this case, we felt pretty confident our solution would work.  We spend the next hour or two measuring the engine, designing parts in Solidworks, and running some test prints. 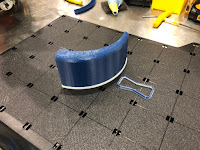 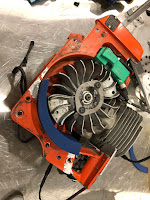 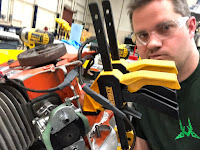 The parts would be used mostly in compression, sandwiched between the engine mounting plate and the engine.  This would provide us with more mounting points that hadn't previously existed on the engine.  We decided we would also epoxy these new plastic parts to the engine housing to fill any gaps between the two parts.  Here you can see me feeling very confident about our solution.

While I was working on the engine, Alex was getting waist-deep in our drive train.  After tearing everything down, we concluded that one of our drive motors had loose magnets.  This happens generally after large impacts (like in BattleBots?) and most motors can only take so much abuse.  When the magnets break free from the outer can of the motor, they can prevent the motor from spinning.  Fortunately we have two spare motors and we're able to swap one in.  We also take this opportunity to replace our little wheels, which had turned into even littler stumps of plastic by now.  Actually, come to think of it, does Icewave have the smallest wheels of any bot at this event? 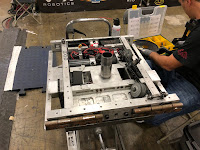 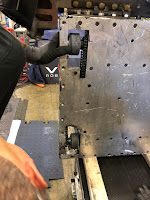 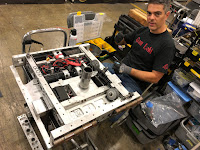 I think by around 9PM, we had everything back together and the epoxy had cured long enough that we were going to try to squeeze in a quick test run in the safety arena before the pits closed for the night.  We wheel the robot outside in the dark, set up some work lights at the test box, and fire up the engine.  I ease the throttle up, and everything seems to be running great, so I continue spinning faster.  The engine is roaring at full bore now and we're pumped that it all came together so well.

Suddenly we start to hear the engine losing some speed, even though I haven't touched the controls.  It couldn't be running out of gas already! We look up, and now we see fire and sparks shooting out from the exhaust pipe, and we immediately know something is wrong.  The engine coasts to a halt and we bring it back to the pit area to assess the damage.  Somehow the head of the engine had managed to work itself loose from the crank case, and now there is a large gap between the two.  Otherwise, everything looked fine!  Honestly, how did the engine rattle itself apart at 15,000 RPM and not cause complete mayhem?

We immediately jump into replacing parts with spares we had brought to the event:  new piston, piston rings, and cylinder head.  We work like a NASCAR team and get the engine back together just before the pits close, with enough time for one last test run.  This time I should probably take it easy on the throttle.  We find out that tomorrow we fight HUGE.

Huge is an amazing robot.  It's not often that we get to see very new, unique bots at BB.  And upon first glance, it seems like a design that would never work.  Then I remember watching one-by-one as they took down each of their opponents in some amazing upsets.  It became clear to me by now that their weapon had to be taken seriously. We make our way to the arena. 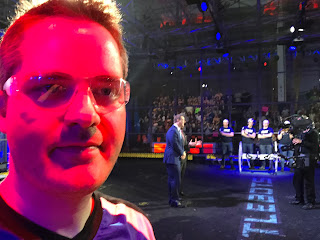 I look like a lobster, so that means we're in the Red Square! 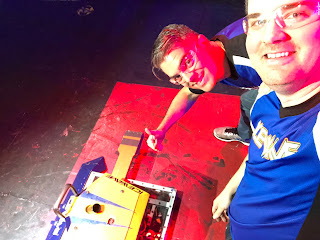 We might be a little delirious at this point.

The match gets started.  I knew I had to be very patient with my driving to avoid their weapon.   I try to circle them a few times, but they rotate in place very well.  Eventually I'm able to sneak in and clip one of their wheel spokes with our blade.  Huge is still standing, but the missing chunk from their wheel causes them to get hung up for a second.  The wheel starts to collapse a bit, and I move in for another hit.  This time our weapons make direct contact and both robots get thrown apart.

Huge is now limping severely, but their weapon is still spinning and they're pivoting on one wheel near the arena wall.  I probably could have stayed back as Kenny suggests in his on-air commentary, but we're only 30 seconds into the fight, and we haven't seen any of the massive hits that are expected from Icewave.  Going into this match, I knew I needed to impress the judges if I wanted to have a shot at the tournament.  I move in for another hit, and this one rips Huge completely in half. 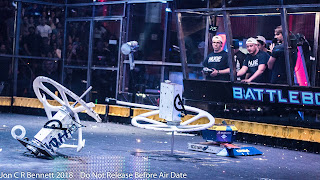 It's always a little bit sad to see someone's creation get split apart like that.  I have to give credit to Jonathan and his team though.  They took the damage in stride and actually had Huge rebuilt before the end of the night!  Check out the chunk missing from Huge's blade where our weapons connected! 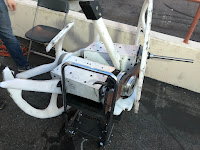 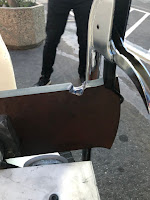 They were also kind enough to sign a piece of their bot and give it to us as a souvenir!

We decided to take a much needed break to go out to dinner.  The next day would be another day off, but then the tournament begins!  Click here to continue to Part 6!