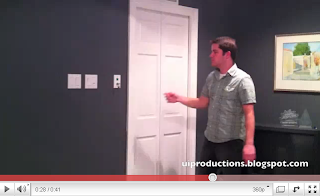 >> Edit:  I just posted a new "extended version" of the video.

>> Edit:  Be sure to check out and vote for my Instructable in both the Humana and Craftsman Tools Contests starting next week!
http://www.instructables.com/id/Air-Powered-Star-Trek-Style-Door/


I haven't posted much recently because I'm working on a few projects that aren't complete yet and I would rather wait to post them after they're further along.  But in the next few posts I'm going to be digging up an old project I finished over four years ago, which I am going to enter into the Craftsman Tools Contest.  I'm also going to talk about my ongoing work on the project, trying to turn it into a viable product.

When I was younger, one of my favorite shows to watch was Star Trek: The Next Generation.  I also visited Disney World about once a year with my family, and my favorite "ride" has always been the monorail.  It is just an icon of all that is futuristic.  To think that it was built almost 40 years ago is amazing.

I always wanted a piece of Star Trek and the Disney Monorail in my house, and one thing they have in common is that they both have automatic sliding doors.  It would be the perfect, most geek-ified entryway for my bedroom.  Only one problem:  I was still in school and still lived at home with my mother in New Orleans.  I had tried to convince her for years that installing a Star Trek Door would be a good idea, but it never happened.  It wasn't until we were renovating our house after Hurricane Katrina that she finally caved in.  There wouldn't be a better time to do it.

To be acceptable as a permanent renovation to our house, I knew the door had to have a normal appearance, as well as be practical and maintenance free.  To reduce the number of moving parts (and maybe for a little coolness factor) I decided to make the door air-powered.  The air would be supplied by a small compressor and storage tank located in the attic.  In order to open and close from the inside and out, the door needed a little bit of brainpower.  I decided to use a small PIC microcontroller, my platform of choice still to this day.  Arduino didn't exist back then.

With a rough plan in my head, I drew a quick CAD model of the door and the brackets that would connect the pistons to the door halves.  I was ready to start purchasing parts: 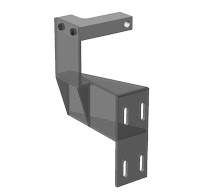 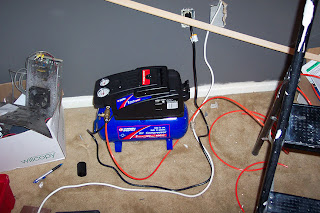 Here is the site of installation, where I had already started busting out the wall.

I proceeded to cut the solid wood door in half with a circular saw, sanding the edges when done.  I considered using bi-fold doors which are already the right size, but they didn't give the appearance of a normal door when joined together.

With all of the interfering studs removed from the wall, I held the rear drywall in place with 3/4" thick wood boards, which would still leave room for the door to travel through the wall.  I added a new 2x4 stud on one side to support the pocket door track, and installed the track and a door half using the included hardware.  You can see below how the one half will slide into the wall cavity.

The track only came with one pair of rollers, since normal people only put one pocket door, not two, on the same track.  Luckily McMaster sells the rollers individually, so I ordered another set.  With some additional metal L-shaped brackets to reinforce the wood, the second door gets installed.  I also started adding electrical boxes for light switches that would need to be moved out of the way.

By this point, the hallway outside my room was a mess, with cracked drywall from my not-so-elegant crowbar and sledgehammer stud removal process.  Carpet was about to go down in the hallway, so it was time to patch things up on the outside.

Some strips of drywall, mud, and trim take care of the hallway with no problem.  Of course you know what the keypad is for.  It was one of those things I had laying around from back in the day when Radio Shack was actually cool.  After about 8 years, I had finally found the perfect application for that piece of alarm equipment I purchased for no reason.

With steady progress, the project is starting to take shape at this point. Now it was time for some of the details to come together.  I welded up a bracket out of some steel flat bar and attached it to the back of the door with a spacer block.  I could have really used some more advanced tools at this point, but I had to work with what I had at the time.

With the mechanical side of the project functional now, it was time to work on the electrical a bit.  I mounted a DIP socket, a relay, and a few other components on a Radio Shack perf board, and placed the whole thing inside a plastic junction box.  I added two power switches, one supplying AC power to the wall adapter for the circuitry, and the other supplying power to the compressor in the attic.  I wanted the whole system to be enabled and disabled from this "control panel", including the air supply.

Around this time, the doors were starting to move under their own power.  The solenoid valve required a minimum of 30 PSI of air to activate properly, and with nothing limiting the flow of air, the door motion started out very violent.  Occasionally they would even cause damage to themselves from such rapid movement.  I also had to add a flow control to each individual piston in order to tweak the doors to meet in the center at the same time.

I took a few videos around this time showing the doors moving in the exposed wall.  Sorry for the horrible video quality.


After countless cycles of testing and tweaking the door operation with the wall open for a month or two, I finally felt comfortable closing up the wall.  Here you can see some of the new drywall starting to go back up.

From there it was just a matter of painting the wall, and it was back to looking stock.  I purchased a blank white wall plate from Home Depot.  I drilled it out for an illuminated pushbutton and a 3-position keyswitch, both of which I bought from McMaster.  I also purchased a plastic hatch door from McMaster for the control box.  Lastly, I added an air conditioning vent above the door.  This lets the air venting noises be heard, and it also provides me access to the valve and pistons should anything go wrong.

The key switch has three positions:  Hold Open, Hold Closed, and Normal Operation.  Normal operation means the door will open when the inside or outside buttons are pushed, and close after a few seconds.  I wired up the keypad so that I could lock the door from the outside, and a #* combination opens the door.  The keypad also has red and green lights which I used to indicate the door's status.  If the door is locked, the red light turns on, and the green light illuminates when the door is open.

And that just about wraps it up.  Four years later, the door is still up and running, and I recently took some photos and video of it in action during my last trip back home.  I also decided to upgrade the air compressor to a new Craftsman 1HP model with a much higher SCFM for faster refilling.  The compressor is hung from a roof beam in the attic with padding to dampen any vibrations.


And the extended version: