Wrapping up the helmet

Day 12
Sunday.  Alex began sanding and prepping the plastic helmet for painting.  The Killer Chrome paint will be arriving on Monday.  We need to make the surface as shiny as possible or the paint will look horrible no matter how great the paint is.  For the most part, Sunday was pretty relaxed and not much happened.  I took the opportunity to work on my LED suit a bunch.

Day 13
Monday.  I began an all-out production line soldering up PCBs.  There are 16 boards that go behind the rainbow side colors, and two main jaw boards that house the PIC microcontroller, the equalizer, and the 3mm round chasers.  The rectangular boards with the three boards and the MOSFET are the rainbow boards.  You can't miss the big through-hole resistor added last-minute.  Oops.

Meanwhile, we tested the LEDs out with the colored cellophane, and we were not impressed at all.  The colors became very washed out under the bright LEDs.  We decided to make some white plastic diffusers that would double as a little structure for the thin colored material.

Now for some bad news...

The Killer Chrome paint turned out to be a disaster, as we had worried might happen.  For some reason, even though the surface was smoothed and shiny at the start, no matter what we did, the jet black base coat always dried flat.  With a flat base coat, there was little hope for the chrome step.  As expected, from that point the chrome step didn't turn out well either, and it was all downhill from there.  Unfortunately, this is the one step we knew would cause us the most issues, and we were forced to resort to our backup plan:  plain old "chrome" spray paint.

Danny and I met up with Alex for our ritualistic lunch at Five Guys.  Alex pulled up and grabbed the gold spray-painted helmet out of the trunk and Danny and I both let out a sigh of relief.  It didn't look THAT bad.  Actually it still looked pretty awesome.  It's nowhere near Volpin-good, but its not bad.

Alex designed the diffusers to snap right into the existing light frames.  Each one is a different shape and they are each numbered very secretively.  Sick!

Danny is starting to glue on some wires for the hair.  It looks like a very painful process.  After work, I started wiring up the electronics in the light frame assembly.  We convened at Alex's house around 8 PM to work on the final assembly.  I drilled and tapped the plastic frames to mount the PCBs with #4-40 screws, while Danny and Alex worked on the colored cellophane and the EKG decal.  The color material is doubled-up and glued with 3M spray adhesive.

When both of our parts came together, we tested out the colors under the diffuser panels.  Pretty cool!  We mounted the light frames into the helmet.

We adhered the visor to the helmet with some PSA (aka double-sided tape).  With some quick splicing of wires, we were able to get both sides running a test pattern.  We were expecting the two sides to slowly become out of sync, but happened sooner than we expected.  I will be adding some basic communication between the two sides in order to alleviate the sync issues.  We videotaped the "unveiling" since it was such a special moment.


All in all, I think we've done pretty good considering the circumstances.  We're way ahead of schedule, only a few small items remain.  Even though we knew we'd never reach perfection, we have learned a lot and it came out looking pretty nice. 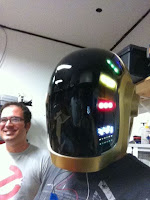