Warning: This post contains spoilers! If you have not watched our match with Rotator, you should come back later and read this after watching!

A Day to Prepare

Coming off a victory against HUGE, we felt confident that a 3-1 record would place us solidly in the tournament of 16.  At this point we did not know the exact match-ups though.  We get to work on the teardown and inspection of Icewave.  It's starting to become familiar, but very tiring, now.

After inspecting the bot, it looks like nothing failed.  Our 3D printed parts had survived and kept the red engine in one piece!  This is great news, but now we have a tough decision to make.

Our new engine crankcase has finally arrived, but it'll be a massive effort to dismantle the old yellow engine and transfer all of the parts over to the new crankcase.  The crankcase also has to be heavily modified (with a precision angle grinder) to remove all the excess material.  With not much else to work on, we begin that process.  However, we tentatively decide to leave the red engine as-is on the robot, since it seemed to be working.  Installing a brand new engine could introduce a lot of new, unanticipated problems. 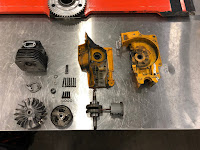 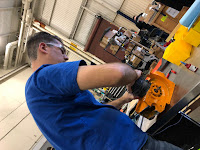 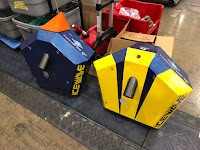 We also take the opportunity to run everything again in the test arena just to be sure it's all good.  We're feeling pretty content at this point.  We have our new spare engine ready in case we need it after this match, but we'll fight this upcoming match as-is. 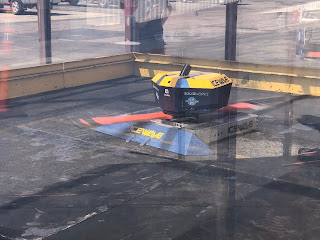 We learned going into this match that Rotator was changing configurations.  Victor was going to add our least favorite defense mechanism, a big sloped plow on the front of Rotator, in place of one of their discs.  As usual, this is frustrating, but expected.  Without putting much thought into it, I guess I mistakenly assumed their single disc would be the one near the floor.  It wasn't until we were lining up to fight that I realized this configuration meant their disc would be raised up high on the back.  Our engine cover is only made from very thin 1/8" aluminum sheets.  This should be fine though, since our primary defense is our spinning blade anyway.  In 3 seasons no robot has done significant damage to our engine, because they just can't get past our blade.  We make our way to the arena. 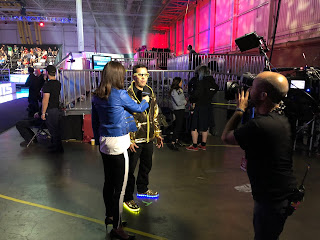 Victor looking like he's ready for an EDM festival. 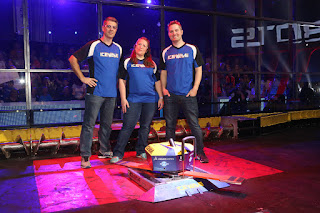 Upon learning we made it into the tournament, Angie couldn't keep herself away.  She flew back in for the weekend so we were a complete team again!

The match gets started, and we spin up to full speed.  Our two bots clash a few times and our blade creates a shower of sparks off Rotator's new titanium plow.  Everything seems to be going fine, and we've avoided flipping over so far. 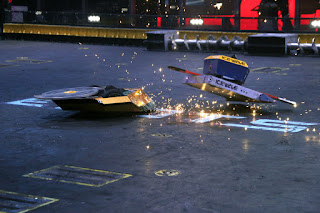 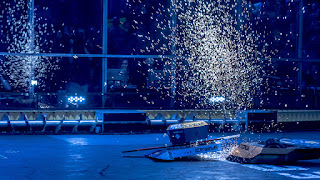 This entire time I am doing my best to avoid confrontation with Rotator in the arena.  I ask Alex what he thinks is going on, but it's not clear why the engine is behaving this way.  Regardless, now it seems dead for good, as Alex attempts to restart to no avail.  I drive around for a few more seconds, but without a spinning blade, I know I'm going to have to face the music at some point.

I bite the bullet and drive straight into Rotator.  His disc immediately tears through our engine cover with ease, and the engine inside has been hit.  At this point, nothing else could be done but to try to show aggression by driving straight into him and shoving him around.  Unfortunately, this meant more and more engine pieces would get ripped off until Rotator had slowly dismantled the entire upper half of Icewave.

Short of a miracle, nothing would stop Rotator from taking the win at this point.  We continue driving as aggressively as possible for the remaining 2 minutes with a 5 MPH robot and no blade.  The judges rightly claim Rotator as the winner, and that ends our run at the 2018 Giant Nut! 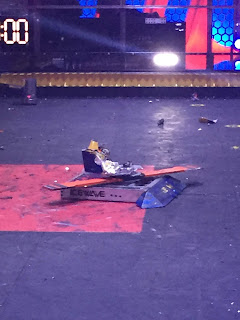 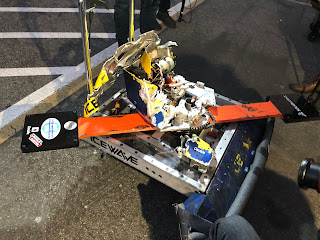 While we're disappointed at how this match turned out, we're mostly frustrated that we'll never know why the engine died.  It's nearly impossible to investigate the root cause when your engine is spread across the arena floor in 100 pieces.

What's Next for Icewave?

Overall we are very pleased with Icewave's performance this season.  It was a drastic improvement over our missteps in 2016, and we definitely had some amazing fights.  Another season hasn't been announced yet, but we've already begun thinking what to do next.  We're excited to have a clean slate (literally) to work with.  Should we double down and build a custom engine that is more robust than the old one?  Should we do the smart thing and switch to electric motors and abandon the ICE completely?  Send us a message on our Facebook page and let us know what you think we should do!